Southern Spirit is a 2008 grulla gelding out of DP and Silky and owned by Leigh Hamrick. A very handsome boy, don't let the good looks fool you. Spirit is an accomplished hunting horse, finished out in both, hog and deer hunting.

We have used Spirit in the woods where he has proven to be a very steady mount, reliable and brave. It takes a special horse to be called a finished point horse. 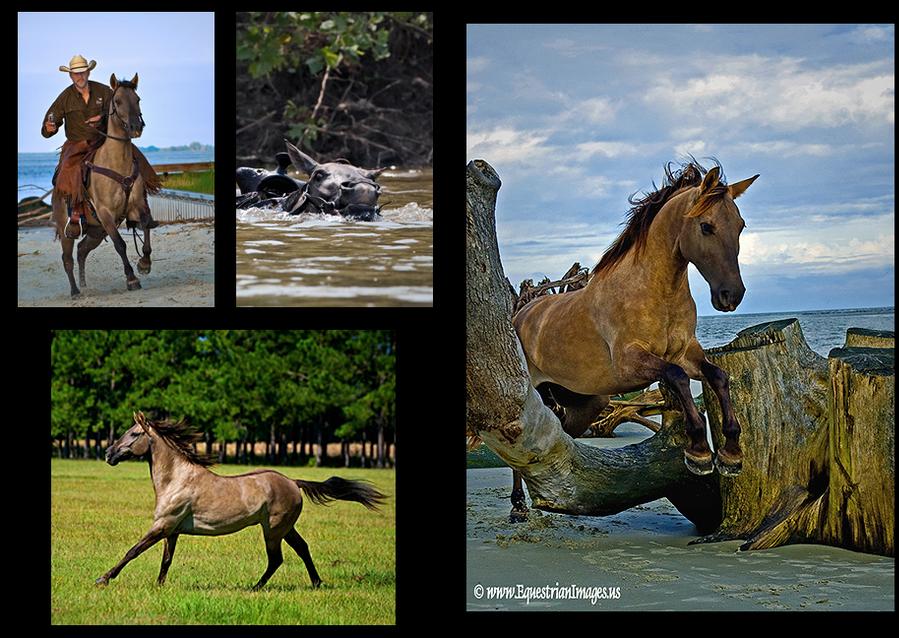 Our hunting horses have been bred according to the legendary attributes of the Marsh Tacky: versatile, durable and sensible. Nurtured from the womb to the saddle, our horses' mettle is tested hunting deer and hogs in the river bottoms of the Pee Dee River. In addition, we strive to help our horses succeed in other areas and disciplines and carry on the Marsh Tacky tradition of being an all-around horse that once made it such an integral part of South Carolina's history.

We occasionally have Marsh Tackies for sale. Please email davidgrant@bellsouth.net to inquire. 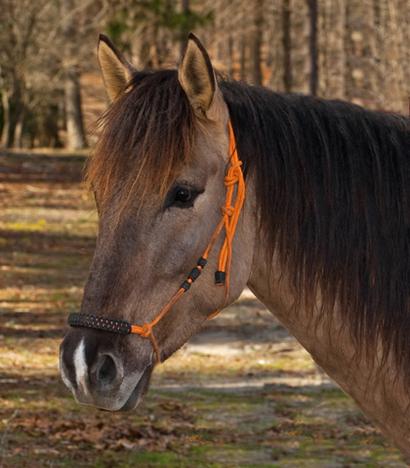 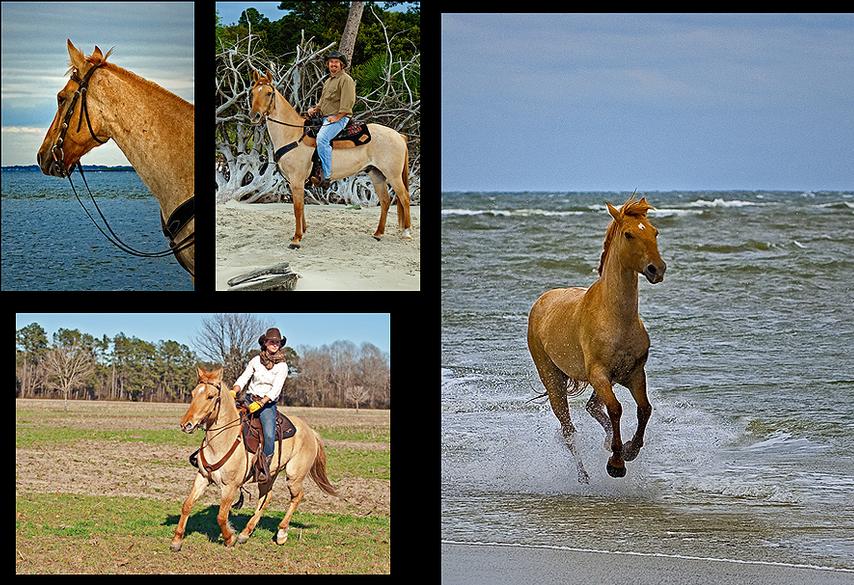 Sweet Home Alabama, barn name Bama, was born in 2005 to sire Cowboy and dam Roany. On his paperwork, his grandfather is listed as “Daufuskie Island stallion.” We like to imagine his ancestors running wild and free on the uninhabited coastal islands of South Carolina. That wild, island spirit lives on in Bama, a clay-baked dun gelding with fiery red tips in his mane and tale. He is a sensitive, hair trigger Tacky ready to hit the gas before you step on the pedal. He has developed into a strong, balanced, athletic Tacky that rides like a Cadillac. Despite being a gelding, he manages his herd of horses like a stallion and is always looking to pick and nip at other horses to assure them that he is the Man. Despite his dominance in the pasture over other horses, he is a very willing and pleasurable riding partner with a gentle and kind nature on the ground. He is owned by Wylie and Leighton Bell of Bell Broke Stables. 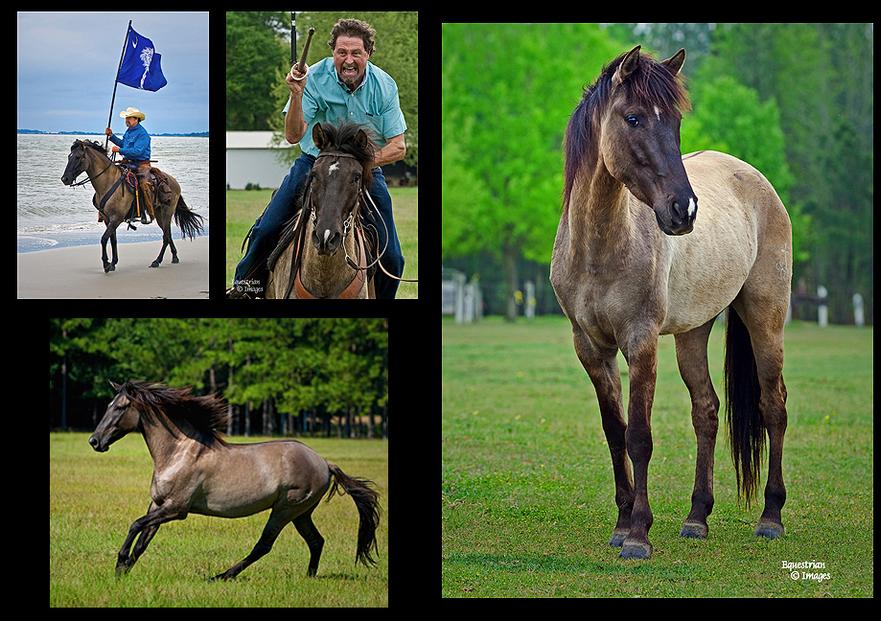 Southern Drifter was born in 2010 to sire is DP and dam Silky. Drifter is up and coming. We have learned to "read" our Tackies and let them tell us what next level of training they are ready for. Drifter is a prime example of that. Drifter has had different trainers work with him as he grew up, each summing him up as a little stubborn and "different'. Yes folks Tackies are "different" to train, a lot easier going and preferring to get the basics out of the way then let's go ride and see the world. Drifter really blossomed and found his calling when Master Tacky Trainer Wylie Bell of Bell Broke Stables took him for a few months. Wylie soon discovered Drifter was getting really bored in the round pen. He told her in his actions let's go walk-about! After just a few of Wylie's famous "LONG RIDES" she felt him change beneath her. He was more relaxed, eager and bold which what we expect out of our horses.

The name really suits him in his presence he kind of drifts along at his own pace, taking in the sights and sounds. Tacky is as Tacky does we say here at CMTO. That is one of the millions of reasons we love them so, they all such individuals, each one responding in their own way to training and challenges. Our line of Tackies come into this world nickering Louis Armstrong infamous song "What a wonderful world." Yes "Satch-Mo" it is a wonderful world even more so since the Good Lord created the noble animal the Horse!

Postel is a 2005 grulla gelding out of Dapper Dan and Sandy and owned by Ashley Jones. He is a finished hunting horse for both hogs and deer. Postel has a unique and  mischievous personality and an animated gait. He is fearless in the woods, and if you can hang on, he will take you to the bay. Postel is like a big rabbit. He’d rather jump over briars than go through them. Many an unsuspecting rider has found himself in a briar patch upside down, because when Postel jumps, he gets some height despite his size.

Postel is barely 14 hands tall. There must have been a mistake when the good Lord gave out hearts for horses, because Postel has a heart more befitting a draft horse. He has earned the respect from all who have witnessed his feats, the greatest being a life-saving swim out of the Great Pee Dee River in a near tragic riding accident. With nothing but his nostrils flaring above the water and weighted down with a saddle, Postel fought a strong current to swim the width of the river safely to shore.

Nevertheless, Postel really loves the water and has been dubbed by many as the "sea horse." He has been joining Team Marsh Tacky on a number of riding excursions and is being mentioned in many hunting stories.

There's Marsh Tackies and then there's Toogoodoo. He is truly one of a kind. He has always run a little hot, but he is a reliable ride in the swamp. Wading across sloughs of water, jumping trees, pushing through briars and vines, keeping his feet in the thick of the mud and the muck, Toogoodoo’s big motor and smooth riding gaits come in handy.

Toogoodoo is a 2005 model, 14-hand dun gelding. Marion Broach purchased him from David Grant in 2009 after he was allowed to ride him a few times hog hunting. Marion knew he was special from the start, and if he was going to buy his first Marsh Tacky, he wanted a veteran of the swamps of the Great Pee Dee River like Toogoodoo. When he hears the dogs get on a hog, he is going to get you to the bay. You just have to hang on for the ride. However, if you really want a wild ride, ask him to drag a hog back to the truck. Not his forte. But like we said, there's Marsh Tackies and then there's Toogoodoo.

Toogoodoo’s sire was Dapper Dan, but his dam is not named on his registration papers. When the official registry of Marsh Tackies was being developed, there were many Marsh Tackies whose exact lineage was not known. Because they were DNA tested, these horses were allowed to be entered into the registry.

Toogoodoo gets his name from the Toogoodoo River that runs through the Low Country near Charleston. Toogodoo is as mercurial as this tidal river that has its highs and lows, but he is one heck of a horse that Marion wouldn’t trade for anything. 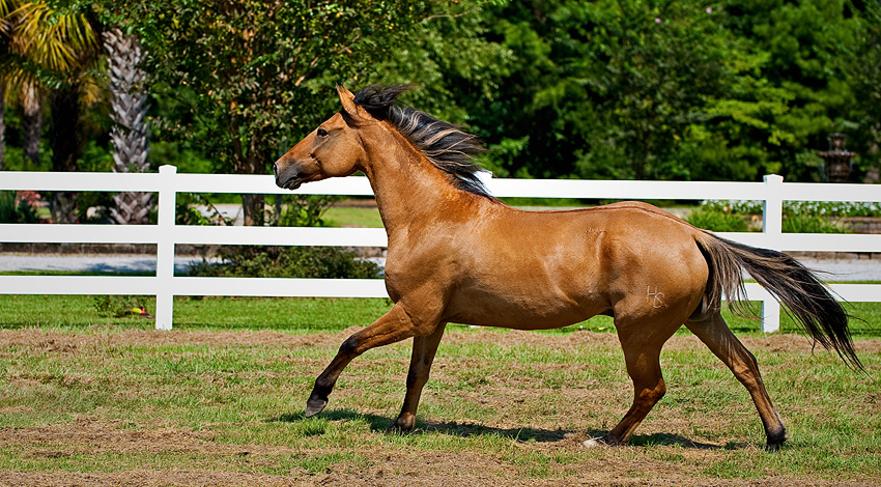 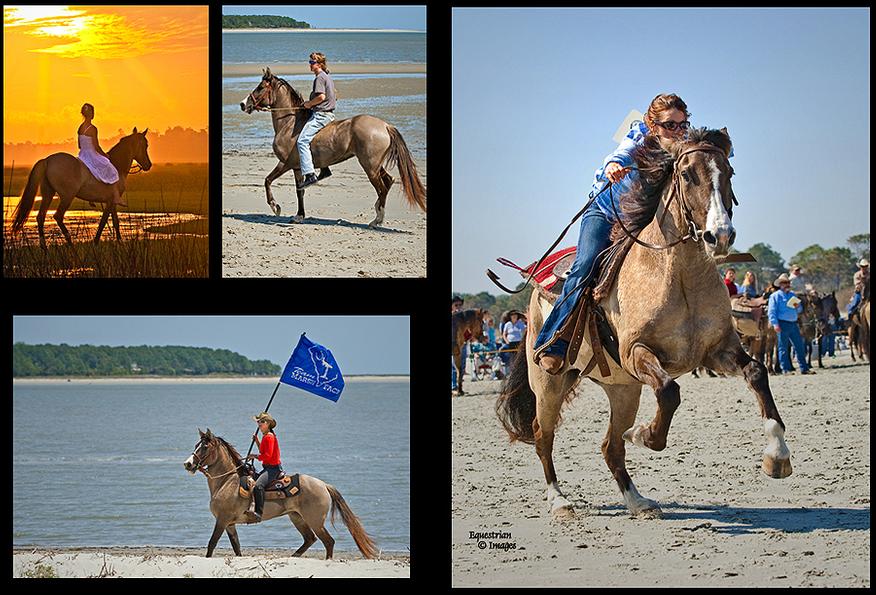 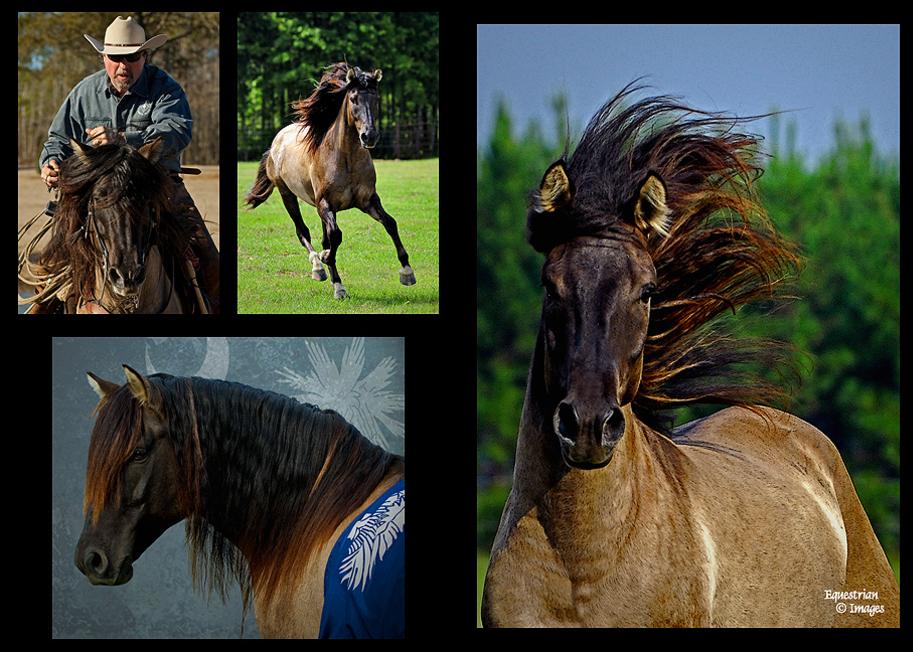 Simpson is a 2007 grulla gelding out of DP and Bee Bop and owned by David Grant. We have been hunting off him since 2010, and he exemplifies what we’re looking for in our horses: mentally solid and physically tough. Being herd sire DP's oldest son, Simpson is accomplished in both disciplines, hog and deer hunting. He is considered a finished point horse.

The Pee Dee Cowboy uses him for the TV show Horse Tales extensively. Simpson has been roped off of, used for lancing, done cowboy mounted shooting, raced on the beaches of S.C., many trail challenges, trail rides, and the list goes on. According to Sam Helms of Hired Gun Horsemanship, "he is pretty quick and likes to go!" Simpson has a big motor and even a bigger heart. His endurance and strength are becoming legendary with Team Marsh Tacky. We harvested a 464-pound boar that was lodged in vines and briars. A friend's Quarter Horse could not get the hog started, when David Grant dallied off on Simpson who reared up and leaped, got the boar started and proceeded to drag him out to the road - to the amazement of everyone who watched, even the Pee Dee Cowboy.

Simpson is named after David's beloved mother; he was born the week she passed away. 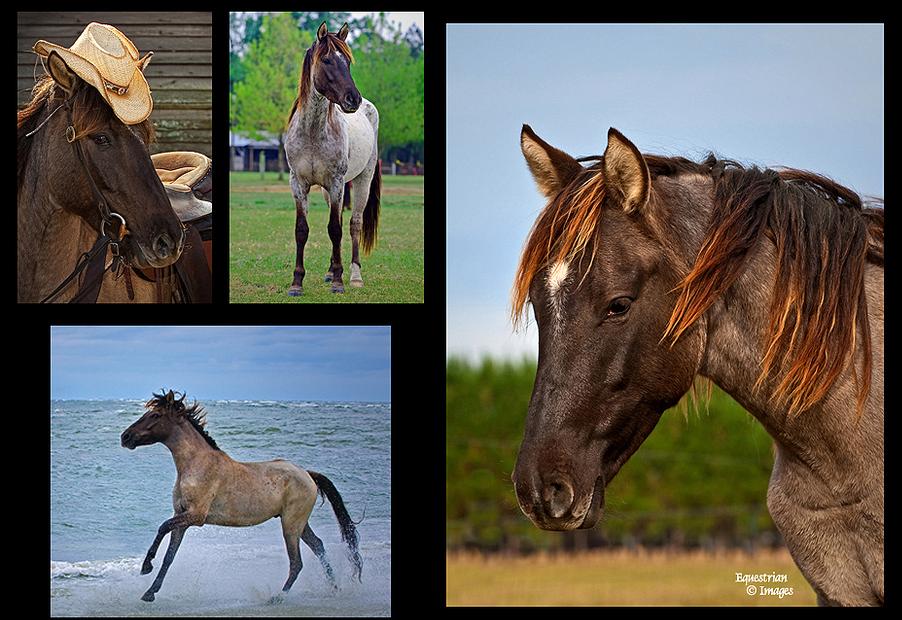 Southern Cross, barn name Faith, was born 2012 to sire DP and dam Coco. We recognized immediately that this clay-baked dun filly with a full red mane and tail was going to special. At the spindly age of 3, she is taller than most full grown Tackies. She is light on her feet and a beautiful mover, but she is still building muscle and developing athleticism. She has a very soft eye with a sweet, dainty nature to match. She is curious and inquisitive, unconcerned about things on her back, but still a little fearful of the big world. We are allowing her plenty of time to grow up and putting many “pleasure” hours on her before we see just what she is capable of. Faith is owned by Wylie and Leighton Bell of Bell Broke Stables. 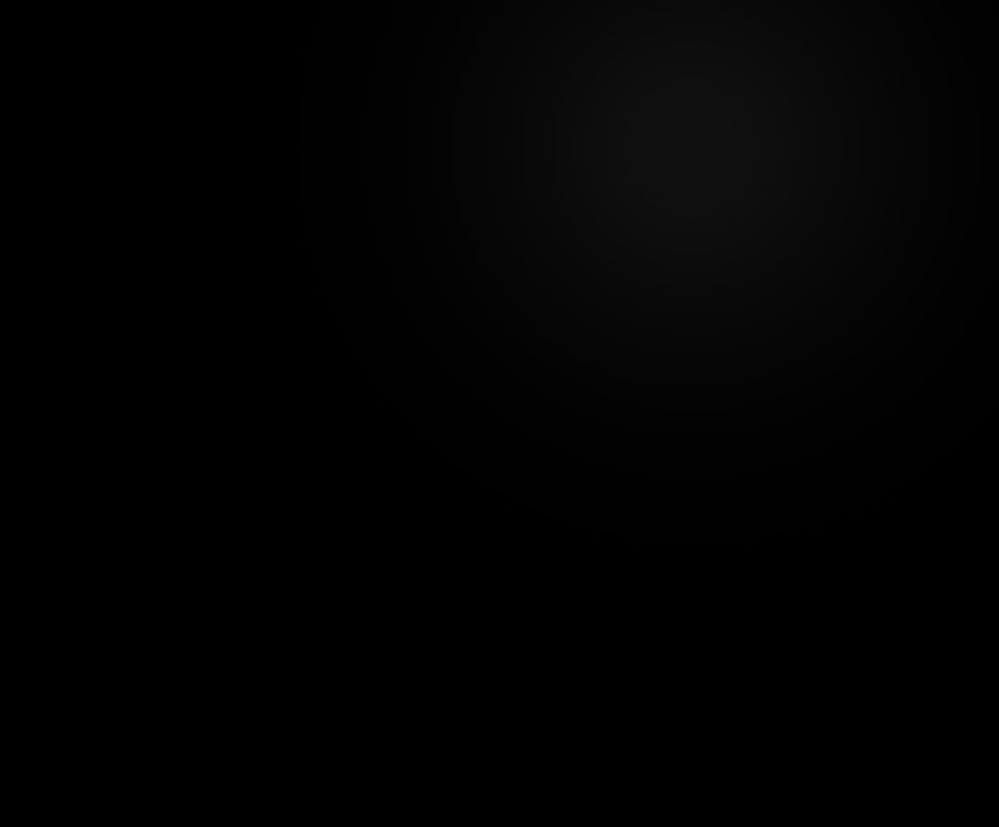 Southern Breeze was born in 2008 to sire DP and dam Blessing. Breeze is anything but a gentle whiff of air. She is the eye of a storm, the funnel of a tornado. She is built like a tank with a solid rounded body and thick crested neck. She has been bold and brave since the day she was first saddled, going any direction you pointed her and not letting anything stand in her way. She is bossy and moody and not a huggable horse, but she is a rock steady riding partner. She has been ridden by many novices, but an experienced rider who recognizes her sensitivity to subtle cues and gentle hands will get the best out of her. Breeze is owned by Wylie and Leighton Bell of Bell Broke Stables. 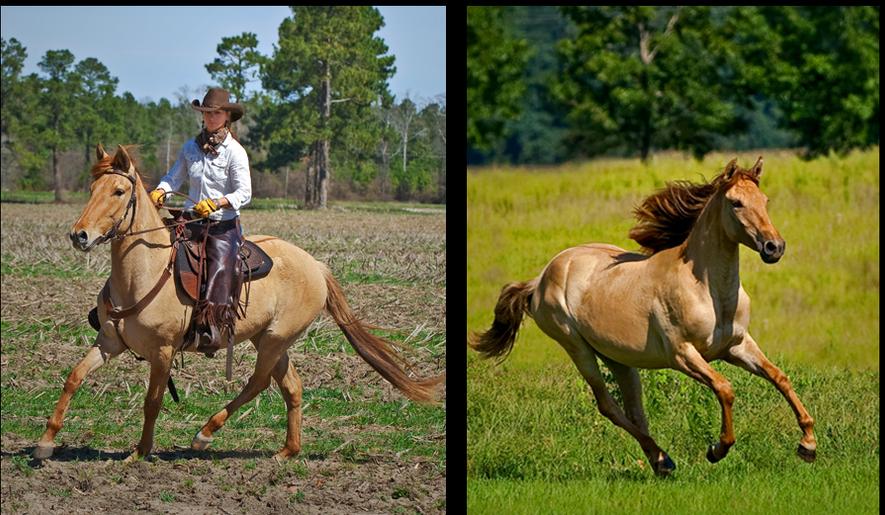 DP is a 2004 grulla Marsh Tacky stallion out of Hacksaw and LL MT-69 and owned by David Grant. He has the desirable double mane and long forelock. His conformation is consistent with the standards set by the Carolina Marsh Tacky Association.

The many people who have had the privilege to see DP in action at a hog or deer hunt can attest to the fact that good looks and conformation aren't DP's best attributes, but his mind, his attitude and his disposition. He is infallible in most every situation he is put into and an excellent point horse.

DP was started as a 2-year-old and turned out with the broodmares to breed as he matured. This was at the inception of the Carolina Marsh Tacky Outdoors program, so DP pulled double duty as both, stud and mount, because there were hardly any riding Marsh Tacky horses for sale at the time.

In his first year under saddle, DP and David Grant fell into a big hole during a hunt. DP had to crawl out and he waited until David got out. Most horses would have been in the next county. At the age of 4, David and DP attended their first public trail ride using nothing but a rope halter. DP never nickered at any mares, other than showing normal curiosity. Anyone who has ridden DP agrees that he has a presence and strength about him - meekness if you may. Power under control. He has had a 400-pound boar hooked on him and while he had to jump to get started, once he did, out of the woods he came dragging that huge boar.

DP is kept in a 20-acre pasture where he is able to be a horse with his herd of broodmares and foals of different ages. We have had some exceptional foals by DP and more on the way. They all have his calm and gentle disposition. DP has been at the core of our mission to raise horses that will continue the proud heritage of the Marsh Tacky and provide many with infinite memories. DP is a regular guest on the television show "Horse Tales" and he has been featured in numerous publications.